Located north of the village of Greve in the heart of the Chianti Classico region, the Nozzole estate covers a striking, rugged, mountainous area of about 1,000 acres, a third of which is vines and olive groves. The finest Chardonnay grapes are selected from the Nozzole estate’s 222 acres of vineyards at 984 feet in elevation. In order to obtain concentration and complexity, yields are kept low. The vines for Le Bruniche grow on one of the estate’s highest hillsides, where excellent sun exposure and limestone and marl soils help to maintain an optimal ground temperature. Le Bruniche grapes are gently pressed and the juice is cold settled. The must is fermented in stainless steel vats at a controlled temperature and stays on the lees for about three months. Malolactic fermentation is in stainless steel tanks and the wine is aged at least two months in bottle before release, with no oak contact.

Shows citrus and exotic fruit on the nose and palate, with medium-full body. The absence of oak allows the Chardonnay character to shine through.

This wine pairs well with fish, shellfish and chicken. 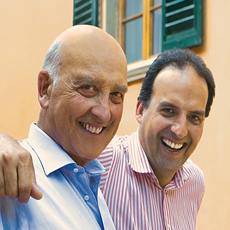 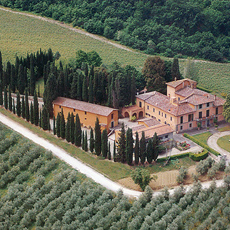 On land that has supported winegrapes for seven centuries, Tenuta di Nozzole produces wines that respect both tradition and innovation.

Le Bruniche Vineyard
The principal white vineyards of the Nozzole estate, Le Bruniche and Casa Vecchia, were once planted in Trebbiano Toscano and Malvasia, which were white grapes included in the Chianti blend before they were phased out of the DOCG rules in 1995. In the mid-1980s viticulturists at Tenuta di Nozzole began experimenting in these vineyards with various classic white vine varieties. Of the two principal white vine vineyards, Le Bruniche was found to be exceptionally well-suited to the Chardonnay variety. Vigneto Le Bruniche lies on one of the estate's most elevated hillsides, at 900 feet above sea level, on soils consisting of limestone schists and porous marl rubble with an optimum ground thermal temperature and excellent exposure. Extensive experimentation with various clones of Chardonnay preceded selection of the most appropriate vine for the site, which produced its first vintage in 1986.

Chardonnay
Though it has a distinctive profile, Chardonnay reflects other factors such as soil composition and vinification technique. Chardonnay is a reliable, hardy and prolific vine whose only real vulnerabilities are frost and uneven development of fruit.
Nozzole
Other products