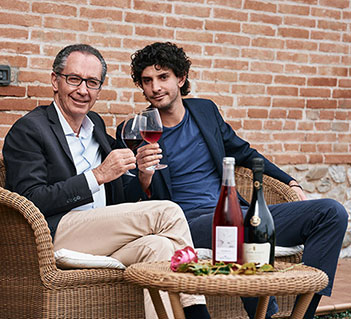 Medici Ermete has been owned and operated by five generations of the Medici family, who have devoted themselves to the winery since its inception in 1890. Alberto Medici, who oversees the production of Medici wines with his father, Giorgio, was born in Reggio Emilia and educated in Economics at the University of Parma. He represents the fourth generation of the Medici family, along with his cousin, Pierluigi, and his sister, Alessandra. The fifth generation, represented by Alessandro Medici, joined the family winery with the aim of both preserving and evolving the historic family property. Alessandro’s first project was the creation of Phermento, a Lambrusco produced in the ancestral or ‘pet-nat’ method, which embraces ancient techniques and modern winemaking simultaneously.

Alberto Medici is responsible for revolutionizing the production of Lambrusco wines by lowering yields and developing a unique fermentation process to elevate the quality of the wines. Under his stewardship it became possible to release Concerto, the world’s first single vineyard Lambrusco.  He chaired the Young Entrepreneurs Association of Italian Wine (AGIVI) from 1998 to 2001.  And in 2002 he was elected to the Board of the preeminent Italian wine association, Unione Italiana Vini, a prominent position he continues to hold.

The Medici family’s dedication has been rewarded by the success of its wines worldwide. Today Medici Ermete wines are exported to more than seventy countries around the world. Their message of quality has been resoundingly reinforced by elite accolades such as Gambero Rosso’s coveted “Tre Bicchieri” award and the best in show Champion Trophy, earned at the 2010 International Wine Challenge in London.