The winery owns 15 sites totaling 560 vineyard acres in Carneros, Rutherford, Howell Mountain and Anderson Valley as well as other prime locations in Napa.

Cakebread Cellars began with the vineyard lands on the original 22-acre property in Rutherford. Over the years, the family has acquired additional vineyards throughout Napa Valley and the North Coast. Today, the winery owns 15 sites totaling 560 vineyard acres in Carneros, Rutherford, Howell Mountain and Anderson Valley as well as other prime locations in Napa. 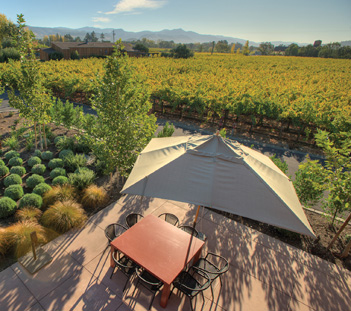 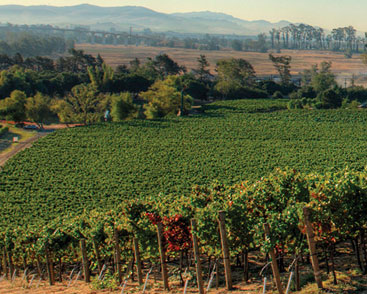 Rutherford is known for exemplary Cabernet Sauvignon, and it is to this vine that about 70% of the AVA is planted. The appellation consists of about six square miles of valley floor vineyards and benchland vineyards situated in the rolling foothills of the Mayacamas Mountains. The valley vineyards are fertile, with volcanic soil, and the benchlands are well drained and less fertile, with gravelly sand and alluvial soils. Summers are warm during the day, with morning fog possible in the valley.

In Carneros, which lies to the south bordering San Pablo Bay, the climate is much cooler and windy, suited to the Chardonnay and Pinot Noir that predominate there. Cakebread Cellars owns four vineyards in the region: Milton Road (42.5 acres), Tinsley Ranch (27 acres), Foster Road (31.5 acres), and Cuttings Wharf Road (56 acres).

Anderson Valley is located in Mendocino County on the hilly western slope of the coastal mountain range. It is a cool, often foggy region where Cakebread grows Chardonnay and Pinot Noir on 46 acres.

Acquired in 1999, Dancing Bear Ranch consists of 28 vineyard acres on Howell Mountain in northern Napa Valley, from which a single-vineyard red wine is produced. The vines are rooted into shallow, rocky soils at 1,450 to over 1,600 feet above sea level. With its near 360-degree exposure, the site offers a wide range of growing conditions.

Cakebread also draws on 400 acres of vineyards of Cabernet Sauvignon, Sauvignon Blanc, Chardonnay, Zinfandel, Merlot and Pinot Noir over which the Cakebreads exercise either complete control or start-to-finish management and decision-making authority. Approximately half of these, located in the cooler mesoclimates to the south in Carneros, are the source of the winery’s Chardonnay grapes; roughly a quarter are in Sauvignon Blanc vineyards located in Rutherford near the Cakebread winery and the other quarter are in Cabernet Sauvignon vineyards in the Stag’s Leap, Rutherford and Oakville areas.