Mourvèdre produces big, meaty, rustic wines high in alcohol, acidity and tannin, which can develop finesse and complexity after a few years in bottle.

Mourvèdre does best in cool clay soils and requires a warm climate and abundant sunshine to ripen. It is a vigorous, moderately productive vine that buds late and ripens late. At less than full maturity Mourvèdre has no flavor, but when overripe, it can taste like stewed fruit. The berries are fairly small and deep blue-violet in color, with extremely thick skins that are highly resistant to rot.

Native to Spain, the Mourvèdre vine, or Monastrell, as it is called there, is believed to have originated either near the town of Mourviedro in Valencia or the town of Mataró in Cataluña. The variety is planted throughout southern Spain and France, where it has been found at least since the late 1500s. It is also grown in California, Australia and South Africa. 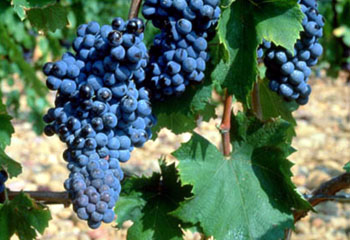