Cinsault is only rarely vinified as a varietal wine. Its relatively low tannins make it short lived. It is more appreciated for volume than for character. However, when yield is restricted it can produce distinctive wines of intense color and flavor with good acidic balance. It more often contributes to the blend of exceptional red and rosé wines, notably Châteauneuf-du-Pape and Tavel rosé.

Prolific and adaptable to many soil conditions, Cinsault buds relatively late, ripens early and is susceptible to problems associated with damp weather. This hot-climate variety thrives in the arid, windy Mediterranean basin.

Found throughout the Rhône and Languedoc-Roussillon, Cinsault was widely planted in North Africa and Corsica because of its ability to withstand high temperatures. Cinsault also became popular after it migrated to South Africa in the mid-1800s. At one point it accounted for nearly a third of Cape plantings, where it was known until the 1970s as Hermitage, a confusing misnomer. Along with Pinot Noir, it is a parent grape to Pinotage. 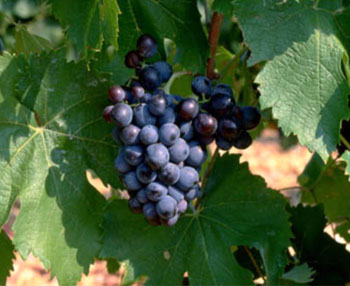