Carmenère is a medium-bodied wine with a deep red color and soft tannins. The wine is best drunk young. In Chile, however, more ambitious wines can be very concentrated, with significant aging potential.

Carmenère needs a long growing season in moderate to warm climates. The vine does poorly if there is a lot of rain in winter or at harvest. The grape tends to develop high levels of sugar before the tannins achieve ripeness. Its lower acidity combined with high sugar levels and underdeveloped tannins make it difficult to achieve a balanced wine.

Carmenère may be a descendant of the Roman vitis biturica, and was once widely planted throughout the Médoc and Graves. It was considered to be on almost equal footing with Cabernet Sauvignon. When phylloxera struck in the late 1800s, Bordeaux’s Carmenère vines were nearly destroyed, but some cuttings were transported to Chile, where they were mistaken for Merlot. The vine, having recovered its name, continues to thrive there today. 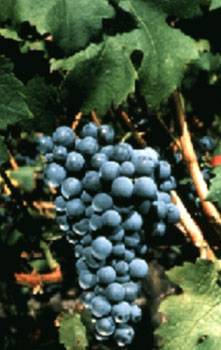