If the Casa dos Alambiques, purchased in 1744 and now a modern winery, is Taylor Fladgate's oldest holding, their famed vineyard estate Quinta de Vargellas is by far the most important.

Taylor Fladgate has earned a global reputation for producing wines of remarkable consistency and exceptional quality. It is known especially for its sought-after vintage Portos and venerable tawnies, and for pioneering the late bottled vintage style, a category it still dominates. Today Taylor Fladgate is proud to be the only Porto company that has remained 100% family run throughout its history. 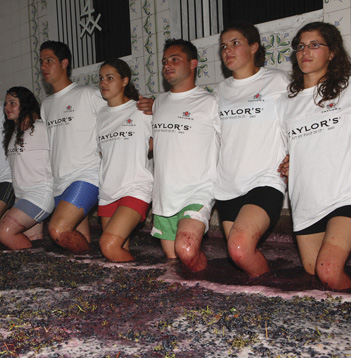 The origins of Taylor, Fladgate & Yeatman lie in the 1670s, with Job Bearsley, an English merchant in Minho. Bearsley’s initial activities were in the wool trade, and the “4XX” logo, originally his woolmark, was branded on bales of wool, and later, casks of Port wine, for shipment. The firm was officially founded in 1692, and Bearsley moved his offices to Oporto; this date places Taylor, Fladgate & Yeatman as one of Oporto’s oldest Port houses. Bearsley’s son Peter was the first Englishman, in the early 1700s, to venture into the primitive reaches of the Upper Douro to purchase wines. Another son, Bartholomew, acquired the first British-owned property in the Douro in 1744, the Lugar das Lages. Located at Salgueiral, close to the old town of Regua, and including the 18th-century Casa dos Alambiques, it is still among Taylor Fladgate’s operative holdings.

Arriving at a Name

During the first century and a half of its existence, until 1844, the company name changed 21 times as a function of change in partners or ownership. The current name began to form when Joseph Taylor joined the firm in 1816, followed in 1837 by John Fladgate, a London wine merchant later made Baron by the King of Portugal.

The present name of Taylor, Fladgate & Yeatman was adopted in 1844 when Morgan Yeatman, also a wine merchant from Dorchester and long-standing client of Taylor Fladgate, became a partner; the Yeatman family is today the principal partner.

A Company of Firsts

Taylor Fladgate’s 20th-century era is filled with firsts. The firm was the first to market a drier style of white Port, called Chip Dry White, in the 1930s; Taylor Fladgate also created late bottled vintage, or LBV Port, first released as “Vintage Reserve” in 1955. The first LBV as such, from the 1965 vintage, was released in 1969. Most other houses have since followed suit, but Taylor Fladgate remains the strongest label in this category. Another innovation later adopted by several houses was the firm’s creation of a single-quinta (or single-vineyard) vintage-dated Port. Though records indicate a Quinta de Vargellas Port of vintage date was marketed in London in between 1820 and 1829 (surely the first such wine ever produced), Taylor Fladgate was first to resume release of a single-quinta Port in modern times, with the 1958 Vargellas, released in 1968.

Taylor Fladgate has owned its own quinta since it purchased the ailing Quinta de Vargellas in 1893. If the Casa dos Alambiques at Lugar das Lages, now a modern winery, is Taylor Fladgate’s oldest holding, their famed Quinta de Vargellas is by far the most important. This spectacular, “A”-rated, 255-acre property, in the far reaches of the Upper Douro, barely 25 miles from the Spanish border, is the firm’s crown jewel. Nearly 100 years later, this property was supplemented by the purchase of Quinta de Terra Feita, which further helped to ensure Taylor Fladgate’s consistency and noted house style.

Taylor Fladgate today is the namesake property of the Fladgate Partnership, made up of three of the most historic and highly regarded Porto houses: Taylor Fladgate, Fonseca and Croft. Partnership Portos are produced with the attention to quality that is the standard to which all other Port wine houses aspire. It is a family-run company, with the present members representing the eighth generation of the Yeatman family, originally from the Port house of Taylor, Fladgate & Yeatman, now with more than 300 years of history. The group owns several of the best-known wine estates in the Douro Valley—including the famous Quinta de Vargellas and Quinta do Panascal—totalling more than 290 hectares of A-classified vineyard. It also has interests in tourism and catering.