The famed Rutherford bench is defined mainly by the distinct flavor characteristics it imparts in the Cabernet Sauvignon grown there.

Sequoia Grove’s Estate Vineyard lies in the Napa Valley’s most revered red wine growing region, midway between Rutherford and Oakville on the famous Rutherford bench, an area that extends east from the highway to the base of the Mayacamas mountains and is defined mainly by the distinct flavor characteristics it imparts in the Cabernet Sauvignon grown there. The Sequoia Grove Estate Vineyard’s 18 planted acres are dedicated primarily to Cabernet Sauvignon (85%), with the remainder to Cabernet Franc, Merlot, Petit Verdot and Malbec. Each variety and clonal selection has been matched with the soil type to which it is best suited, with Cabernet Sauvignon in gravelly loam and other varieties in the deeper, richer soils. 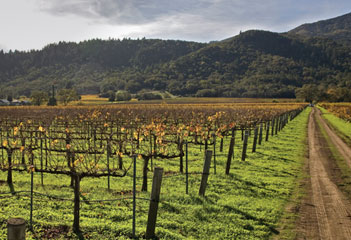 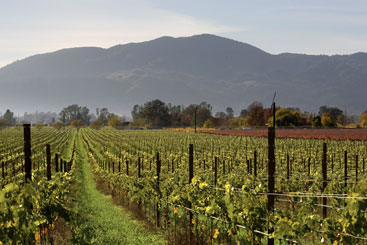 In 2006, Sequoia Grove reached an agreement with the Tonella family to take control of their famed vineyard in Rutherford. The 50 planted acre parcel lies on Skellenger Lane, close to the Oakville line. The vineyard has a long history; it was originally part of the Mexican land grants and was owned by the diocese of San Francisco for a time. Over the next 70 years, the property was owned by the Rutherford brothers (for which Rutherford is names) followed by the Tonella Family.

In 2010, the winery meticulously replanted the vineyard to select Cabernet Sauvignon clones. With its variety of soil compositions and microclimates, Tonella Vineyard produces fruit with distinctive Rutherford character and flavor profiles. Tonella has 40 acres planted to Cabernet Sauvignon, 6 acres of Cabernet Franc and 3.5 acres of Merlot.

Carneros is a cool-climate AVA that spans the southern tip of both Napa and Sonoma counties, defined by its mesoclimate rather than along political borders. Here, the Pacific Ocean and San Pablo Bay send cool breezes through Carneros and up the valleys, and provide foggy summers in the vineyards. The region’s long, cool growing season allows grapes to ripen slowly and fully. Sequoia Grove works with three vineyard parcels in the Napa section of Carneros to source the highest-quality fruit for its Chardonnay.

This highly regarded vineyard on the Rutherford bench is managed by Gary Morisoli, who takes great pride in keeping the vines in balance with minimal interaction. In the dry-earth farming style, the heat from the ground helps to concentrate the flavors in the intense black fruit that defines Rutherford Cabernet. Morisoli fruit from a 9-acre parcel has been the foundation of Sequoia Grove’s Cabernet wines since 1982.

Located in the Oak Knoll District of Napa Valley, Lamoreaux Vineyard is part of a 750-acre estate acquired by the Lamoreaux family in 1949 and farmed today by Phillip Lamoreaux. There, on 50 acres of primarily volcanic soil, Cabernet Sauvignon and other grapes are grown for some of the finest Napa Valley wineries. Sequoia Grove has sourced prime fruit from a 12-acre parcel since the mid-1980s. In addition to the long-time sourcing of Cabernet Sauvignon Clone 7, the Lamoreaux family in 2007 replanted a portion of the parcel to Clones 169 and 34 specifically for Sequoia Grove.

One of the most famed vineyards of Napa Valley, Stagecoach Vineyard rises 900 to 1,850 feet above the valley’s eastern side. Excavated by Jan and Bart Krupp from a billion tons of rock, the vineyard now has 600 acres of vines in 175 different vineyard blocks. These south-facing slopes with volcanic soil provide fruit to numerous top wineries in the valley. Sequoia Grove has sourced prime Cabernet Sauvignon, Cabernet Franc, Merlot and Petit Verdot from an 18-acre parcel since 2001.

Sequoia Grove: It All Starts in the Vineyard
Kobrand Wine & Spirits