America loves Jadot. They first locked eyes over a bottle of Beaujolais and the love story continues…. Louis Jadot, inspiring romantic tales since 1859. 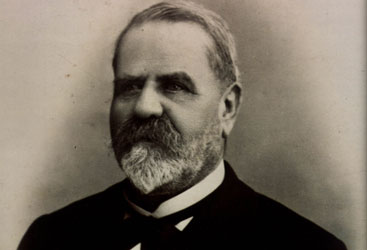 The Founding of Maison Louis Jadot

Maison Louis Jadot was founded in 1859 by the man whose name it bears, Louis Henry Denis Jadot. The first of his family arrived in Beaune from Belgium in 1794 and soon began purchasing Premier and Grand Cru vineyards. With grape growing a part of his heritage, Louis Henry set about gaining experience first in the cellars, in the evaluation of wines, and then in the vineyards, in the study of viticulture.

As Louis Henry traveled he acquired a faithful clientele and in 1859 purchased the respected négociant firm of Lemaire-Fouleux and gave the firm his name. After his death, his son, Louis Baptiste Jadot, enthusiastically carried on the work his father had begun. He expanded his export markets as well as his clientele in France, reinvesting his profits in the acquisition of vineyards in some of the finest and most famous Grands Crus and Premiers Crus of the Côte d’Or.

In 1939, Louis Baptiste Jadot died and left control of the firm to his eldest son, Louis Auguste Jadot, who had assisted in the direction of the business under his father since 1931. He opened and greatly developed the new export market of the United States, as well as those of Great Britain, Holland, South America and New Zealand.

The Arrival of André Gagey

In 1954, André Gagey joined Maison Louis Jadot as assistant to Louis Auguste Jadot. When Louis Auguste Jadot died in 1962, survived only by his wife, André Gagey was appointed managing director of the firm, with full responsibility for its operations, under Mme. Jadot’s ownership and direction. As managing director, Gagey was for nearly three decades responsible for the final decisions over selection and purchase of all grapes and wines bottled under the Jadot label, as well as the care and maintenance of the vineyards within the Jadot estate.

The Current Generation of Leaders

In 1970, aware that Maison Louis Jadot’s future growth lay in its increasing role as owner-producer, Gagey engaged Jacques Lardière, a brilliant young enologist, as his assistant and eventual technical director. Lardière is today acknowledged as one of Burgundy’s finest winemakers, an artist with the reins of nature in one hand and those of technology in the other. In 1984, André Gagey’s son, Pierre-Henry Gagey, joined the firm with a strong background in business administration and management and an inherited knowledge of wines. In February of 1985, the négociant firm of Maison Louis Jadot was purchased by the owners of Kobrand Corporation, sole United States importer of Jadot Burgundies since 1945. In 1991, Pierre-Henry Gagey assumed the position of president.

Ensuring Quality in the Cellar

Maison Louis Jadot’s principles of vinification balance tradition and technology, and focus on the purest expression of each wine’s terroir, taking the lightest possible hand in winemaking. Louis Jadot and Château des Jacques are attributed with revolutionizing the winemaking of Beaujolais. Jadot has invested in modern wineries dedicated to Beaujolais and Mâconnais wines only, and painstakingly vinifies all its wines rather than buying wines ready-made.For its Beaujolais and Mâconnais wines, Jadot practices a further, though expensive, practice called réplis, in which wines of a higher appellation are incorporated into a wine bearing the appellation below them. Thus, for example, Jadot’s Beaujolais-Villages will customarily contain a percentage of wines from Beaujolais crus.