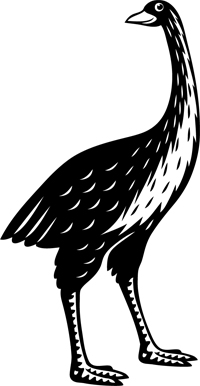 The Moa (aka The Infamous Goose) was a species of flightless bird indigenous to New Zealand.  The largest reached about 12 feet tall and weighed roughly 510 pounds.  It was the dominant herbivore in New Zealand, thriving on forest, shrubland and subalpine ecosystems for thousands of years.

According to record, the Moa met its end as the favorite prey of the ominous Haast Eagle, a species of massive eagles that once lived on the South Island of New Zealand with a wingspan greater than 12 feet, and at the hands of the Maori who hunted them to extinction.

According to legend on the other hand….