Croft is renowned for its Vintage Ports as well as for its range of wood aged reserves and tawnies, made using time-honored styles refined by skill and experience passed down through the generations.

The merchant company that we know today as Croft was founded in 1588, during Elizabeth I’s reign, by Henry Thompson of York, England. Today, Croft is a part of the Fladgate Partnership, three of the most historic and highly regarded Porto houses, including Taylor Fladgate, Fonseca and Croft—a family-owned company that sets the standard to which other Port houses aspire.

The Earliest Years of Croft

The Croft family can be traced back 700 years, and first became involved with Port wine shipping through their connection with a distinguished family of merchants, the Thompsons of York, through marriage. It was only natural that the two families should combine their business interests in the wine trade.

A great-grandchild of this union, John Croft, was born in 1732 and was to become the most famous personality in the house. He traveled regularly between York, where he was sheriff for quite some time, and Oporto, and was a member of the British Factors, who built the historic Factory House in 1790 that still stands today. In 1788, his treatise on the wines of Portugal was published, an event that placed the Croft family at the forefront of the British community based in Oporto. 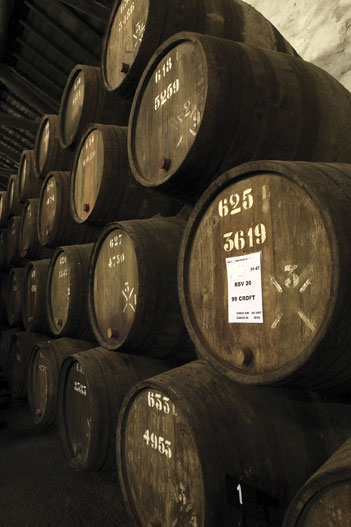 Croft’s treatise allows great insight into the early days of the Port wine trade. When British shippers first started to buying and selling Port it was not a fortified wine but rather a heavyweight wine that was probably no more than 12% alcohol by volume. There is no exact date for when Port became fortified to help stabilize the wine on its long journey to Britain, but John Croft mentioned monasteries in the Douro that were adding brandy earlier in the fermentation process, producing an off-dry Port. These slightly sweeter Port wines became popular in Britain and prompted growers to begin adding the brandy earlier in the fermentation process. The sweet Port wine that we know now finally evolved by the mid-18th century.

By 1827, Croft & Co. had become the fourth largest Port wine shipper. One hundred years later, the company occupied the number one position. The house of Croft enjoys a major reputation for its Vintage Ports in particular and acquired Quinta da Roêda in 1875 from John Fladgate, Baron of Roêda and a partner in the Taylor firm.

Croft has aged its wines on the same premises in Oporto since the 19th century. These include the famous Terreirinho vault, the longest Port wine lodge of all, which measures over 140 meters from end to end. The company’s cellars house an extensive and rare collection of vintage Port, including some that have never been sold.  A new winery began operation upriver at Quinta da Roêda in 2002. There, state of the art fermentation tanks were installed, modeled on a design developed by Taylor Fladgate & Yeatman’s winemaking team. These Port-Toes, as they have come to be known, aim to emulate the action of the human foot by the use of pistons to macerate the wine. The team have also reinstalled a large number of traditional granite lagares in which to tread the grapes for the vintage and single-quinta wines by foot.

Croft today is part of the Fladgate Partnership, made up of three of the most historic and highly regarded Porto houses: Taylor Fladgate, Fonseca, and Croft. Their Portos are produced with the attention to quality that is the standard to which all other Port wine houses aspire. It is a family-run company with the present members representing the eighth generation of the Yeatman family, originally from the Port house of Taylor Fladgate & Yeatman, now with more than 300 years of history. The group owns several of the best-known wine estates in the Douro Valley—including the famous Quinta de Vargellas and Quinta do Panascal—totalling more than 290 hectares of A-classified vineyard. It also has interests in tourism and catering.