Wine grapes have been grown at the estate since the 1500s, making it one of the oldest estates in Châteauneuf-du-Pape. 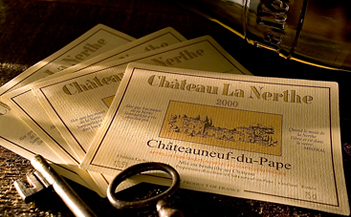 In 1870, the Tulle de Villefranche family sold the property to the Joseph Ducos family. The sale took place in part, because of the devastation caused to the vineyards by Phylloxera. The Ducos family made their mark on Chateau la Nerthe’s history by replanting the vineyard on grafted phylloxera rootstock and by planting new, local grape varieties; 10 of the 13 permitted varietals were planted. The Ducos family maintained ownership of the property until 1941 when Château La Nerthe was bought at an auction by the Leclerc and Motte families.

By 1985, Château La Nerthe had become dilapidated and was put up for sale by the Dereumaux family and purchased by the Richard family in partnership with David and Foillard negociants. Their goal for the estate was to revive the original values of excellence and innovation. A complete renovation of the estate took place and much of the vineyards were replanted. In 1991, Château La Nerthe was able to expand their holdings with the purchase of 54 acres of vines, which helped to create one of the largest estates in the Southern Rhône with 230 acres. In 1998, the vineyard is certified organic. Rémi Jean joined the Chateau la Nerthe team in late 2019 and has been placed in charge of the estate and its winemaking. Rémi Jean has had a long partnership with the Richard Family Wineries, previously worked as General Manager for their Bordeaux properties, Château de Corcelles and Château des Tours.