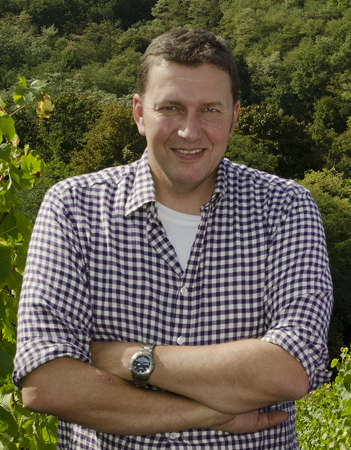 "I don't know what is more mind-boggling, the quality of Domaine Zind-Humbrecht's wines or Olivier Humbrecht's complete dedication to quality. This tall, powerful, and intellectual man may well be the finest winemaker in the world." - Robert Parker
Olivier Humbrecht MW
Owner and General Manager

Olivier Humbrecht, General Manager of Domaine Zind-Humbrecht, is the second winemaker in the world to attain Master of Wine status.  With degrees from the Ecole Supérieure d’Agriculture de Purpan and Université d’Oenologie de Toulouse in Agriculture and Oenology, respectively, Olivier earned his Master of Wine certification in 1989.  The same year, he took over winemaking from his father, continuing an unbroken lineage that extends back to the year 1620.

Since 2002, he has served as President of the Syndicat International des Vignerons en Culure Bio-Dynamique/ Biodyvin (SIVCBD).  He became President of the Alsace Grand Cru Association in 2011.