Watari Bune, the rice used to make this sake, is one of the only pure strains of sake rice being used today

The Huchu Homare Brewery is located in the town of Ishioka, in Ibaraki prefecture, just an hour from Tokyo by train. Hundreds of years ago, Ishioka was the capital, or huchu, of Ibaraki. The Huchu’s cherished spring water was called Huchu Rokui. Medium soft and iron-free, it is perfect for brewing sake. When the first generation Yamauchi founded the brewery in 1854, he named it Huchu Homare or “Pride of Huchu” to celebrate the history of Ishioka and its water. Today, the brewery is a national cultural landmark, producing just twelve thousand cases of sake per year.

Watari Bune, the rice used to make this sake, is one of the only pure strains of sake rice being used today. It is also the father strain to the most celebrated sake rice, Yamada Nishiki, with Yamadaho as its mother. Most people think Omachi rice was a parent strain to Yamada Nishiki, but it was actually Watari Bune, which had gone out of use for fifty some-odd years, until this brewery revived it.

The Re-Birth of Watari Bune

The owner of the Huchu Homare Brewery, Takaaki Yamauchi learned about Watari Bune from an old farmer who had grown this rice. From the Meiji (1868-1912) to early Showa (1926-1988) periods, Watari Bune was highly valued. However, because the “ear” of the rice plant grew tall and it required late harvest, in late October (most sake rice is harvested in mid-September), Watari Bune could easily be damaged by typhoons before it was ready. The length of the season also made it more susceptible to hungry insects. As a result, Watari Bune fell out of use. 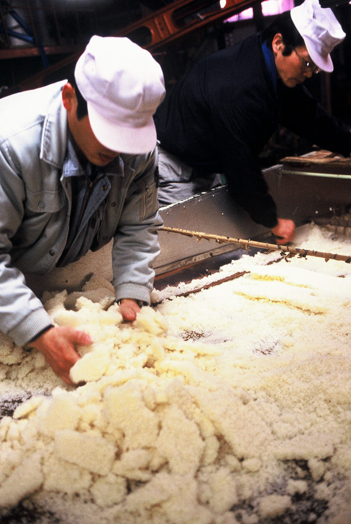 After learning about Watari Bune, Yamauchi-san, the 7th generation director of the Huchu Homare Brewery started his hunt for the rice seeds. He ultimately found this rice under preservation at the Ministry of Agriculture’s National Research Institute. He secured fourteen grams of seedlings and, with a team of local farmers, grew his first crop.

Being the toji, or brewmaster, Yamauchi’s education extended from agriculture into brewing. He learned how the rice behaved, what its unique characteristics were and how to achieve different flavors with different types of sake. He shared his learnings with his farmers and they continued to improve their crop.

The Growth of Watari Bune

Out of the first fourteen grams of seedlings, Yamauchi and his farmers harvested 15 kilograms of rice. In 1990 and 1991, they harvested 1080 and 1650 kilograms respectively. Total sake production grew from 1080 liters in 1990 to1620 liters in 1991. By 1996, Yamauchi-san took home a gold medal at the Japanese National Sake Competition, for Watari Bune Junmai Daiginjo. In 1998, the Daiginjo won a gold as well. Today, Yamauchi and his brewers produce 18,000 liters per year. They are still the only brewers using Watari Bune and, in Japan, the sake is rare and highly acclaimed, mainly enjoyed at sake bars by aficionados.