Taittinger Champagnes are unique in their higher proportion of Chardonnay and the time devoted to aging the wines before release—most often greatly exceeding the legal requirement. 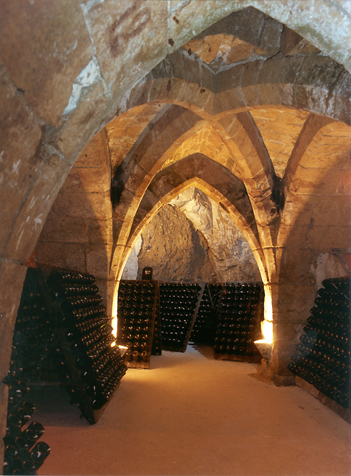 Champagne Taittinger is one of the few remaining family owned and operated Champagne houses. The firm is distinguished for its extensive vineyard holdings of 712 acres, including prestigious Grand Cru vineyards in the Côte des Blancs and Montagne de Reims regions. Unlike most large houses, Champagne Taittinger relies primarily on estate grapes for its portfolio of Champagnes. Also unique are the higher proportion of Chardonnay in its wines that gives Taittinger its signature style, and the time devoted to aging the wines before release—most often greatly exceeding the legal requirement, in a practice that also has become a Taittinger hallmark.

Taittinger was founded upon a promise that Pierre Taittinger made to himself in 1915 when he was a young cavalry officer serving in the First World War, with his company headquarters at the Château de la Marquetterie, two miles from Epernay near the Marne River. Captivated by the lovely 18th-century residence, the young Taittinger was determined to purchase it should the opportunity arise. By September 1930 he had acquired the venerable Champagne firm of Forest-Fourneaux, founded in 1734 and the third oldest Champagne house in existence at the time. He began to restructure the firm and to expand its vineyard holdings in some of the finest producing areas of Champagne. Two years later, Pierre Taittinger kept his promise to purchase the Château de la Marquetterie and its surrounding vineyards—as well as the Comtes des Champagne residence in downtown Reims.

Pierre Taittinger’s philosophy proved him to be a visionary well ahead of his time. An accomplished and respected gastronome, he was among those who, during the interwar years, foresaw changing public preferences in cuisine away from the complex and often heavy traditional preparations that had long dominated the classic culinary arts. The evolution he set in motion centered on two concepts: lightness and naturalness.

Economic conditions acted as a catalyst to this change. Vast areas of the champenois vineyards destroyed during the war had to be replanted. Former primary export markets had been temporarily interrupted. Pierre Taittinger saw the opportunity to reshape the tastes of the traditional Champagne clientele who had subscribed to the old, Belle-Epoque–style Champagnes. He wagered the market would turn away from heavily dosed, sweet Champagnes in favor of natural, elegant wines expressive of their origin, just as it would reject the affront of dense, cloying sauces for pristine foods.

Pierre’s son, François Taittinger, set the standard for lightness and delicacy that was to become the hallmark of the Taittinger style. He was responsible for building and shaping the vineyard, allowing Taittinger to be self-supplying and to distinguish itself with the Chardonnay grape. Indeed, Taittinger has 37% Chardonnay planted in its vineyards, compared to an average in Champagne of only 27%. With his legendary master blender, Roger Lénique, François Taittinger set most exacting criteria for the quality of Taittinger’s wines. He used only fine, old Champagnes in the dosage rather than brandies or fortified wines. He restricted production exclusively to fully dry, brut Champagnes requiring flawless wines of the highest quality obtained solely from the juice from the delicate first pressing of the fruit. He ultimately attained the epitome of delicacy and elegance he desired in his cuvées through the proportionately higher use of Chardonnay, the most costly of the champenois grapes.

Today, Champagne Taittinger is run by Vitalie and Clovis Taittinger, the great-grandchildren of the founder.

Champagne Taittinger is today proprietor of approximately 712 acres of vines in 34 different vineyards. The Taittinger estate is one of the three most extensive in the Champagne district, and the firm’s major holdings in Chardonnay vineyards are the physical expression of the Taittinger philosophy and style.

The La Marquetterie vineyards, planted to the traditional white and black grapes of Champagne, are named for their resemblance at harvest to the checkerboard-like squares of light and dark wood referred to as marquetry in cabinetmaking. These are the vineyards located at the château, part of Pierre Taittinger’s original purchase. They were already quite well known in the early 14th century, when they were owned by the Order of Saint-Pierre aux Monts, whose abbey was located a few miles up the Marne River at Chalons. The cultivation of these and other vineyards was the primary livelihood of the order, which built a cuverie among the vines where Frère Jean Oudart would later conduct his experiments on the nature of sparkling wines. When the old cuverie fell to ruins in 1750, the present Louis XV château was constructed on its site, and took the name of La Marquetterie, after its vineyards.

While La Marquetterie is located at Pierry, near Epernay, Taittinger also owns ancient chalk cellars in downtown Reims, where the firm stocks its precious Comtes de Champagne wines and its large formats. These cellars began as chalk pits in the 4th century, then became the cellars of the Abbey of Saint-Nicaise, which was built above them in the 13th century. The abbey was destroyed during the French Revolution, and today exists only through its Gothic cellars, 17 meters underground.