Shichi Hon Yari is named after the seven spearsmen who became legends at the battle of Shizugatake fought just outside the town of Kinomoto in 1583. In this battle, these seven warriors crushed their enemy and brought victory to their leader, the warlord, Hideyoshi. One battle later, Hideyoshi defeated the Nobunaga clan and secured his dominance over Japan. When the Tomita’s started shipping their sake to the new capital of Tokyo, in the Edo Period, they named their sake after these great warriors and created the “sake of victory.”

Shichi Hon Yari sake is primarily made with Tamazakae rice, Shiga-ken’s indigenous sakamai. The Tomita’s and their farmers use mineral water which runs from the nearby Ibuki mountains down to their village. This water is so suited for sake making that they use it as is, without being filtered. Shichi Hon Yari sake can best be described as light, approachable and well-balanced. 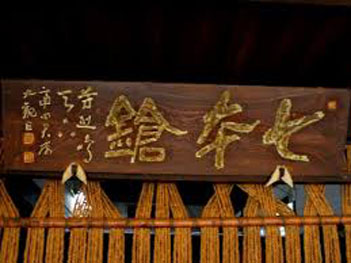 Founded in the 1540’s in the small town of Kinomoto, with its production limited to just over 5,000 cases per year, the Tomita Shuzou is one of the oldest and smallest breweries in Japan. With one toji and three brewers producing every bottle, this sake is truly te–zukuri, or “handmade.”  Today, the Tomita Brewery is filled with the energy of a new generation, as it lays a new foundation for many more years to come.