The Kato’s named their sake “Eiko Fuji,” or “Glorious Mount Fuji” in honor of Japan’s most beloved symbol.

Founded in 1778, the Fuji Brewery is managed by the 13th generation of the Kato family, Ariyoshi Kato.  The Kato’s named their sake “Eiko Fuji,” or “Glorious Mount Fuji” in honor of Japan’s most beloved symbol.  The brewery had been in business for hundreds of years, but it wasn’t until the 1970’s, that it gained recognition as a leader of the growing “jizake,” or “craft sake” boom in Japan.  With several other breweries, many from Niigata, to the South, Eiko Fuji formed the vanguard of the craft sake movement.  Eiko Fuji also contributed to the status of Yamagata and the larger Tohoku (Northern Japan) region as prized sake producing areas. 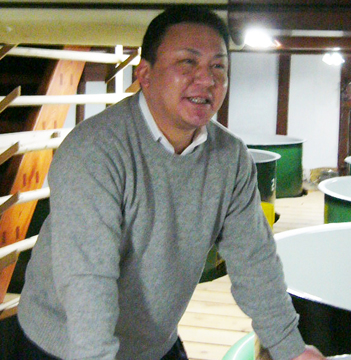 Eiko Fuji demonstrates a classic Yamagata style—light, clean, and fruity, showing notes of green apple and candied sugar.  The brewery is in the town of Tsuruoka, which is called the “Nada of Yamagata.”  Nada is a center of sake making in Kobe.  Although Tsuruoka’s producers are smaller in scale, they still comprise the heart of sake making in Yamagata.  Yamagata also claims that ginjo level sake comprises 60% of the region’s production, making it the largest ginjo producer as a percent of its total.  The long, cold winters of this northern area cool the breweries and create ideal environments for long, slow fermentation in which delicate yeasts produce wonderful aromas and fruity sake.  Being relatively flat and undeveloped, the region produces abundant amounts of rice.  The soft water of the region makes the sake light and velvety.