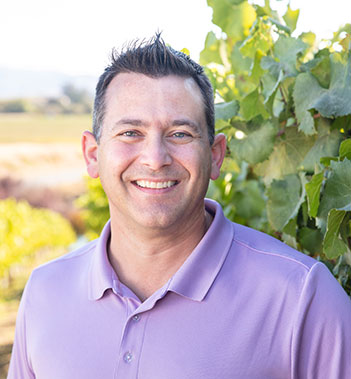 Since 2008, Zak has been an integral part of the winemaking team, now focusing on sparkling wines
Zak Miller
Sparkling Winemaker

A seasoned winemaker celebrating more than a decade at Domaine Carneros, Zak Miller’s journey to winemaking was not initially a straight path. After receiving a B.S. in Forestry from Virginia Tech University, Zak spent years working as a forestry scientist, traveling across the U.S. leading field research study teams and Youth Corps groups and consulting on projects for the government. Zak’s first introduction to wine came at a young age while touring Europe with his parents, but it wasn’t until his now wife was drawn to pursue a winemaking dream in Napa Valley that the possibility of a career in winemaking took hold for him.

It was his first harvest in Napa Valley at Saintsbury Vineyards that gave him a deep respect and fascination for the ever challenging Pinot Noir grape. Eager to continue learning, he traveled to New Zealand and Chile to hone his craft. Returning to northern California wine country in 2008, Zak joined Domaine Carneros with the goal of continuing to evolve his skill with Pinot Noir working closely with TJ Evans and his still wine program at the chateau. Or so he thought.

Working alongside Founding Winemaker, Eileen Crane, opened to Zak a new realm of possibility in winemaking – sparkling wines – and he hasn’t looked back since. Through Crane and the Domaine Carneros team, he developed a deep appreciation for the versatility of both pinot noir and chardonnay in sparkling winemaking and the great skill required to craft beautifully balanced, elegant yet complex wines. And through his work as a sparkling winemaker, he grew to love a variety he admittedly didn’t gravitate toward originally – chardonnay – which provides the base for what he feels is its finest expression (and a personal favorite), Blanc de Blancs.

When Zak isn’t making delicious wines at Domaine Carneros, he can be found savoring food and wine with family and friends and enjoying the wine country life with his winemaker wife and two young children.