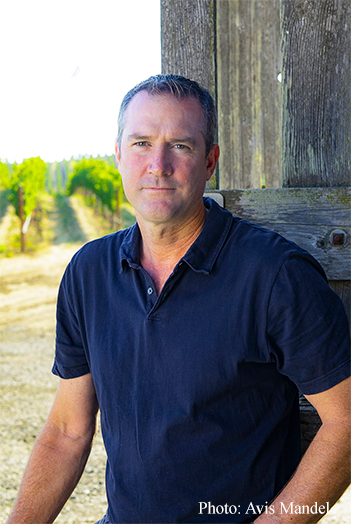 Prior to joining Domaine Carneros in 2008, TJ Evans spent 10 years in a variety of winemaking positions around the world, during which he developed not only winemaking knowledge, but a deep love of Pinot Noir and the decision to make it the focus of his professional life.

Evans grew up in Northern California and completed his undergraduate studies at Amherst College, in Massachusetts. Early in his career, he landed winemaking internships at Robert Mondavi Winery and then Far Niente Winery, where his interest in winemaking was piqued. However, it wasn’t until a life-changing trip to the northern Rhône Valley and an apprenticeship that focused exclusively on Pinot Noir that he cemented his future in winemaking.

In 1997, after completing his master’s degree at UC Davis, TJ traveled to New Zealand to work harvest at Villa Maria Estate, and then to the Rhône Valley, where his time at 500-year-old Domaine Jean-Louis Chave put his winemaking life in perspective.

Upon his return to the United States, Evans took a position at La Crema Winery in the Russian River Valley, where he focused on crafting Pinot Noir—and ignited an obsession with the grape. He then went to Alderbrook Winery in Dry Creek Valley, where he continued to work with Pinot Noir in addition to single-vineyard Zinfandels. While his focus was to expand his knowledge of Pinot, working with Zinfandel was one of the most influential aspects in his understanding of blending. From 2005 to 2008, Evans returned to the southern hemisphere, this time developing a Chardonnay and Pinot Noir estate for Vinedos y Bodegas Corpora in the Bío Bío Valley of Chile.

Upon returning from Chile, and drawing from his past experiences, Evans knew that Carneros was where he could best use his Pinot Noir–making skills. Domaine Carneros was an easy choice: It allowed him to apply his 10 years of experience to the still wines while also exploring the use of Pinot Noir in a way that was new to him—in the production of sparkling wine.

In addition to Pinot Noir, Evans enjoys rock climbing, cycling and a little bit of yoga to get through the harvest.