Delamain’s cellars near the banks of the Charente River were initially built for their ease of access to water transport. In time, it became apparent that the proximity to the water profoundly influenced the Cognac’s development. 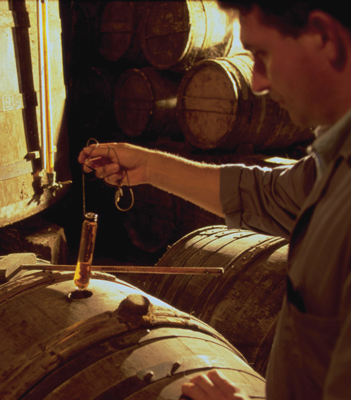 Delamain & Co. holds the most distinguished range of brandy in Cognac. The portfolio begins with the Pale and Dry XO, matured for more than three times the required aging period for the category, and ends with the Le Voyage, an irreplaceable blend of extremely old stocks; this is history in a bottle. Delamain’s reserves of eau-de-vie are sourced entirely from Grande Champagne, the highest quality, most complex and longest lived of the crus, and are matured in their riverbank cellars which ensure the perfect and unique aging that has made the Cognacs of Delamain coveted by collectors and critics alike.

The Delamain name can be traced back to Cognac in 1625 when Nicolas Delamain, a Huguenot from Saintonge, relocated to England to evade religious persecution. He became the protégé of the Duke of Buckingham and was knighted by Charles I in 1639. He received the Delamain coat of arms, an eagle rising atop a gold shield depicting three bloody crosses, which is still represented on every bottle of his family’s Cognac.

The Beginning of a Family Trade

Six generations of Delamains remained in Great Britain until James Delamain returned to Jarnac in 1759 at age 21. He began working for a Cognac négociant named Issac Ranson, selling to the Irish market on commission. James eventually married Ranson’s only daughter in 1762, which was enough to become a partner and successor to his business, now called Ranson & Delamain. After James’ death in 1800, the laws of inheritance created a controversy among his seven children as well as his sons-in-law which proved insurmountable, and the firm was liquidated by 1817.

Just seven years later, in 1824, James Delamain’s grandson, Anne-Philippe Delamain, and his two cousins from the Roullet family began a partnership under the name of Roullet & Delamain, marking the firm’s official founding. In 1920, James’ great-grandsons, Jacques and Robert, purchased Roullet’s shares and the firm became Delamain & Co. In the same year, they christened their Pale & Dry XO, defining the inimitable Delamain style. Robert would go on to author the still-definitive work on Cognac, Histoire du Cognac, published in 1935. He also served on the commission which, in 1936, would set the legal boundaries of Cognac and its crus.

Today, Delamain boasts a range of six different Cognacs, all of which are created to deliver the finest, purest, most authentic expression of the Grande Champagne area of Cognac. Like most Cognac négociants, Delamain does not own vineyards or distill wine. Delamain purchases only the best barrels of eau-de-vie which fit with the Delamain style from independent growers who distill the yield of their own Grande Champagne vineyards. Though some supplier relationships are a century old, Delamain doesn’t keep any contracts, so that every barrel can be purchased only after it has been evaluated and unanimously agreed on.  Delamain buys only brandies with 15 years of age or more, matured in older, large Limousin casks. Of the roughly 400 samples received each year, about 10% meet Delamain’s uncompromising standards for purchase.

After purchase, Delamain stores casks in their own cellars, built during the 17th and 18th centuries. Located about 150 yards from the banks of the Charente River, the cellars were initially built for their ease of access to water transport. In time, it became apparent that the proximity to the water profoundly influenced the Cognac’s development. In more arid cellars, the rate of water evaporation is too high, resulting in dry, alcoholic eau-de-vie. In a cellar that is too humid, the alcohol will evaporate quicker, making limp, flabby Cognac. Delamain’s riverbank cellars have naturally perfect hygrometric balance; an essential factor for the aging and development of fine brandy. The Cognac in each cask evaporates at a rate of 3% to 6% each year. Although evaporation is accelerated in emptier casks, concentration is also increased. Delamain never tops up casks to reduce evaporation, but rather chooses to preserve the individual character and concentration of each cask, despite the loss.

The last, crucial step in making a Delamain Cognac is blending, a process that takes place only when casks of complimentary qualities and vintages have all reached their peak. The final blend is gradually brought down to consumption strength, not by the customary dilution with distilled water, but by the fractional addition of extremely old Cognacs from which much of the alcohol has evaporated. The blended elements spend a final two years in the cellar to mature in unison before bottling. Though color additives are legally permissible, Delamain has never used them; insisting on the purest, most natural expression of its product.