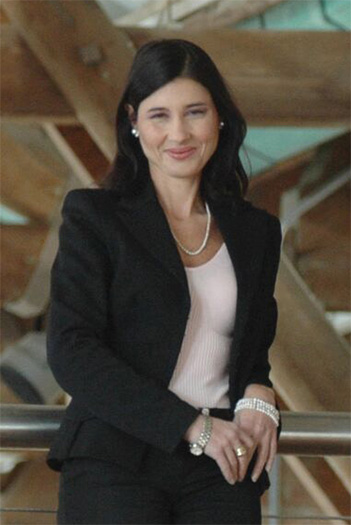 Maria has always kept one goal in mind, and that is to improve and to respect the land of Campania, which the ancient Romans used to call "Ager Falernum" of “Campania Felix”, revealing its beauty and quality to the world.
Maria Ida Avallone
The Doctor, CEO

Born in Naples in 1963, Maria Ida Avallone is the co-CEO, together with her brother Salvatore, of Villa Matilde. They are the children of founder Francesco Paolo Avallone. Villa Matilde came to be due to Francesco’s passion for wine and history. He was an Ancient Roman Law professor in Naples before becoming a wine grower, and it is there that he decided to bring back to life the immortal Falerno, the wine of Roman emperors and poets.

As “figlia d’arte” (a daughter following her parent’s footsteps) Maria contributed enthusiastically to the family business from a young age. She would spend hours carefully applying labels to bottles of Falerno and writing vintages on them by hand.

Before joining Villa Matilde’s everyday operation she was a very successful student, considering a Diplomatic Career and completing both law and politics science majors and after earning a Bachelor’s degree at Naples University in 1983. She also achieved a Master’s degree in Naples at SIOI, a prestigious Diplomatic School. That’s why she’s still named “La Dottoressa” (the Doctor). In 1987 fully she devoted herself to the vineyards and winery.

Maria Ida became a Professional Sommelier with AIS (Associazione Italiana Sommelier) in 1991. She is now a joint CEO of the company with Salvatore and in charge of National Sales, PR and Marketing.  She also manages the Restaurant and Tourism at the winery. The winery is very much “family-owned”, lending a special touch, spirit and attention to everyday operations.

The Avallone Family is also in the tourism business; they own the “Grand Hotel Parker’s”, one of the most beautiful and prestigious in Naples.