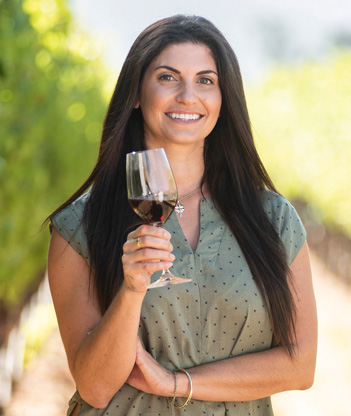 For Katie, winemaking is the perfect combination of science and creativity. After attending UC Santa Barbara for chemistry, Katie Madigan accepted a harvest internship at St. Francis that would confirm her interest in winemaking. After working long hours for four months, doing everything from lab work to vineyard visits, she was hooked. “I loved the fast pace and diversity of the job,” she says. “I didn’t want to leave at the end of every day.”

In 2003 she took a position as senior lab technician and became involved in the research of wine color and tannins. After certification at UC Davis, she was promoted to assistant winemaker in 2006, and  associate winemaker in 2010.

In 2015, Katie was awarded “Best Woman Winemaker” by the International Women’s Wine Competition. She also won Zinfandel Producer of the Year in 2014 and 2015 at the California Zinfandel Championship.