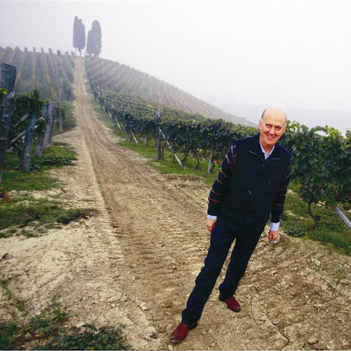 Chiarlo, one of the first in Piemonte to produce single vineyards, has been also a pioneer in vineyards practices. In 1984 he was one of the very first Italian wine producers in limiting vineyards yields.
Michele Chiarlo
Owner

Son of a small vigneron, 2015 marks his 60th harvest, Michele Chiarlo is today one of the most respected producers of fine wines in Piedmont and a leading figure in its viticultural industry.

Chiarlo’s first vintage was 1956, shortly after graduating from the Oenology College of Alba. In the late 1960s and early 1970s he was one of the first Italian wine producer to export Piedmontese quality wines to the US and Europe. He has always been considered a “classic” producer of Barolo; introducing temperature control, moderating oak use and limiting vineyard yields to make a much more accessible style of wine with a true identity.

Chiarlo’s ceaseless innovation, both in production and in marketing, has gained him the respect of his industry. He is currently on the board of “Grandi Marchi Institute” a group of 19 top wineries in Italy’s various wine regions.  As well as the Vice President and co-founder of “Accademia del Barolo”, a prestigious group that puts together 11 Top Barolo producers. He recently served as the President and co-founder of Nizza Association, the “Premium” Barbera Association.