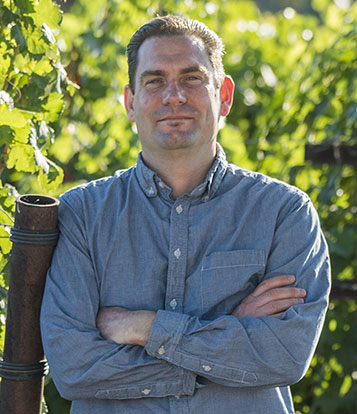 With over 15 years of experience in the wine industry, Dave Frazier kept chasing his dream of crafting Burgundian-style wines. In 2018, Dave’s hard work and dedication lead him to Foley Estates where he creates ultra-fine, small-lot, cool climate wines from the Sta. Rita Hills.
Dave Frazier
Winemaker

Dave grew up in Bakersfield, California and says food and wine played a significant role in his childhood. “When I was in the fifth grade, my best friend moved to Napa and I was fortunate enough to spend every summer with him and his family. Over those summers, we visited nearly every winery in the valley.”

Dave’s early exposure to wine planted the seed that would ultimately lead him to a career in winemaking. Dave initially attended New York University film school and went on to work production in Hollywood. Years later, Dave approached his father about working on his small vineyard in the Templeton Gap near Paso Robles which reignited his interest in winemaking. Dave pursued his passion for winemaking by taking classes at Cal Poly San Luis Obispo. From there, he studied at the University of California, Davis earning a degree in Viticulture and Enology. Since graduation, Dave has worked at Cakebread Cellars, Byron Winery and Cambria Winery. His most memorable harvest was spent in the Rhône Valley of France in Côte-Rôtie. After his legendary harvest experience, Dave attended the famed Hospices Du Beane charity auction in nearby Burgundy. This unmatched experience completely changed the trajectory of his career by igniting his passion for Burgundian-style wines.

Set among the rolling hillside, Foley Estates is located in the Sta. Rita Hills region of the Santa Ynez Valley. The slopes of the hillside vineyards provide a stunning backdrop for visitors to enjoy, but also ideal conditions for grape growing. Sta. Rita Hills is one of California’s prime cool-climate appellations, producing well-structured, beautifully balanced wines. According to Dave, “the combination of climate and soil diversity found in the Sta. Rita Hills offer some of the best grape growing conditions I’ve ever seen.”

Dave lives in Arroyo Grande, California with his wife Kristen who is a local bread baker. His ideal weekends include firing up the grill and taking in a great movie.