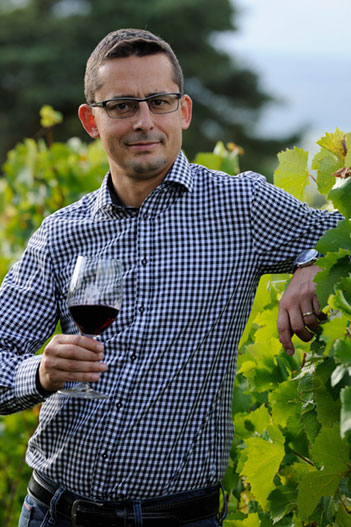 Rémi Jean grew up in a family of farmers in Provence. He received his degree in winemaking and agricultural engineering at Ecole Nationale Supérieure Agronomique in Montpellier. Rémi began his career in the wine cellars of Languedoc, spending one harvest there, after which he moved to Cairanne, a Côtes du Rhône Villages Cru, to work as winemaker alongside the head winemaker. From 2004 to 2007, he was cellar master and winemaker for Maison Louis Jadot in Beaujolais under the helm of Jacques Lardiere. Jacques’ winemaking style and philosophy greatly influenced Rémi, specifically his emphasis on intuition and first-hand experience over technical data analysis. Working under Jacques was integral in forming Rémi’s own methods, and indeed the base from which his learnings have evolved to create his winemaking style today.

Rémi’s experience at Maison Louis Jadot paved the way towards his subsequent reputation as a dedicated wine consultant for the Beaujolais region, and his knowledge and interest for this area’s terroir developed and grew. While working with many small family estates, he became a trusted consultant for the Richard family, who hired him full-time in 2014 as General Manager for the properties of Château de Corcelles and Château des Tours. After five years, Rémi was announced as the General Manager of the Southern Rhône properties, including the iconic Château la Nerthe, bringing Rémi back to his own terroir of origin in Provence.

Beginning with the mentorship of Jacques and through first-hand experience over the years, Rémi has learned that the quality of the wine begins with the quality of the grape and level of care and skill in vineyard management. He practices minimal intervention in the cellar and in winemaking while keeping informed of the latest technology, believing nevertheless that this should be employed only when needed.